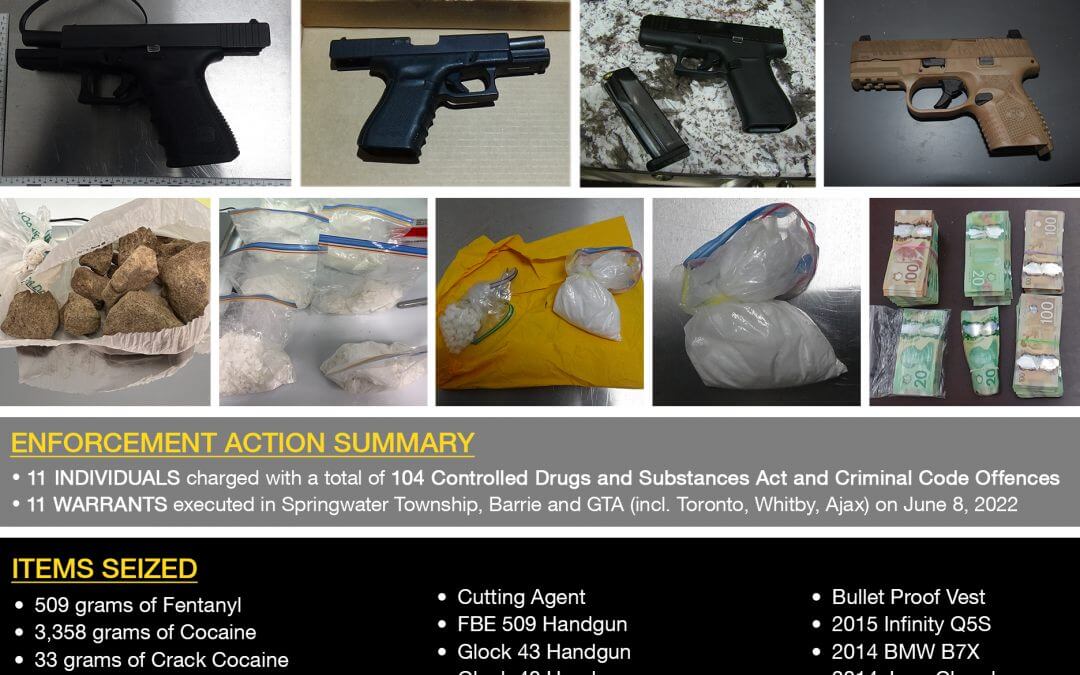 (ORILLIA, ON) – Members of the Central Region Community Street Crime Unit (CSCU), in partnership with the Barrie Police Service (BPS), have charged 11 people with 104 offences under the Controlled Drugs and Substances Act (CDSA) and Criminal Code (CC) as part of a joint drug trafficking investigation in Simcoe County.

The Central Region CSCU-led Project Holcus commenced in April of 2022, in partnership with BPS, in response to fatal and non-fatal overdoses linked to trafficking of crack cocaine and fentanyl in Simcoe County between January 1, and June 6, 2022.

As a result of the investigation, police seized (approximate values):

The amount of fentanyl seized in this investigation represents approximately 5,090 street level doses.

Eleven people are facing 104 CDSA and Criminal Code charges including trafficking cocaine and fentanyl, possession of weapons and property obtained by crime. A full list can be found on the Addendum of Charged Persons included as an attachment to this release.

Illicit drugs continue to pose a significant threat to community safety and wellbeing. Anyone who suspects drug trafficking activity in our communities is asked to contact the OPP at 1-888-310-1122 or Crime Stoppers anonymously at 1-800-222-TIPS (8477) or ontariocrimestoppers.ca.

As a law enforcement organization, the OPP’s role in the opioid crisis is to investigate opioid-related incidences with an acute focus on the apprehension of those who produce, import and traffic illegal drugs. Police are targeting organized crime groups responsible for distributing opioids and holding them accountable for trafficking these drugs that contribute to the opioid crisis in our province.

To find out more about the dangers of fentanyl and short-term antidotes, we encourage everyone to visit www.facethefentanyl.ca, part of an awareness campaign supported by the Ontario Association of Chiefs of Police (OACP). Visit www.opp.ca/opioids for more resources, including annual reports on opioids in OPP jurisdictions.