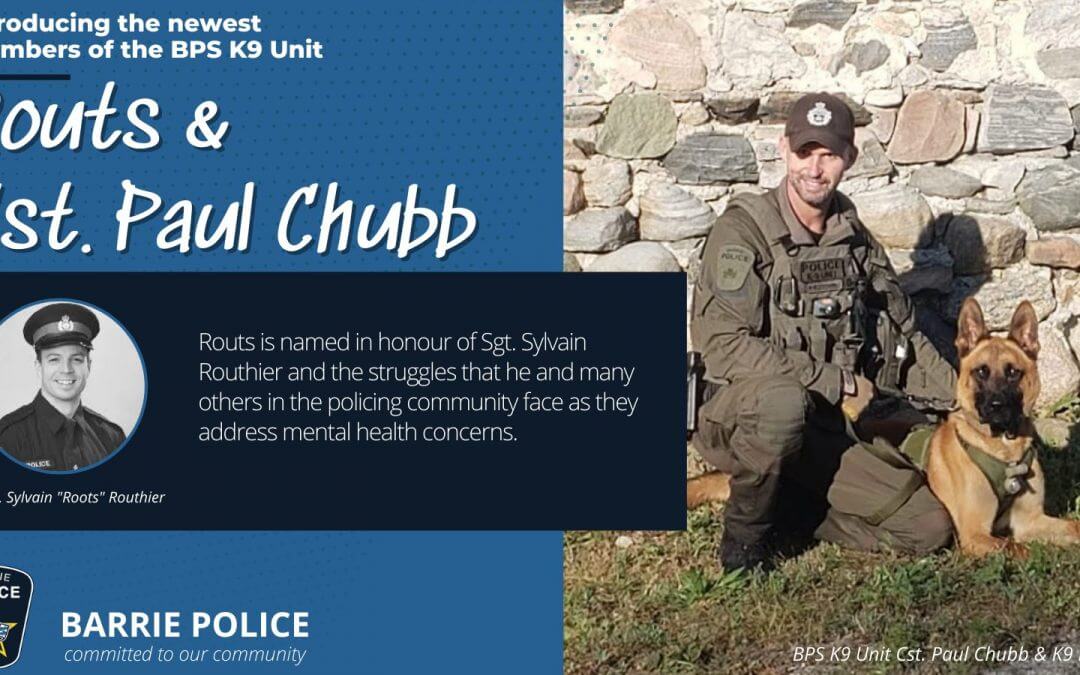 The Barrie Police Service is proud to introduce the newest member of the BPS K9 Unit: Routs!

The name Routs was chosen to honour OPP Sergeant Sylvain “Roots” Routhier. In 2018, Sylvain died by suicide after a struggle with mental illness. Routs’ Handler, Constable Chubb had met Sylvain through training courses and met Sylvain’s wife Sarah through their work at Camp FACES for families and children of emergency services.

Sarah has since become a tremendous advocate for mental health support in policing, and shared that Sylvain always wanted to serve as a K9 Officer – but unfortunately was allergic to dogs!

Mental health concerns within the community and in policing are on the rise, and more needs to be done to eliminate the stigma that surrounds mental health.

Routs is named in honour of Sgt. Sylvain Routhier and the struggles that he and many others in the policing community face as they address mental health concerns. K9 Member Routs will be an important and timely namesake.

“Sgt. Sylvain Routhier was a valued member of the OPP’s Tactics and Rescue Unit, and his death deeply affected our members and our organization,” said OPP Commissioner Thomas Carrique. “As OPP Commissioner, I am honoured by the Barrie Police Service’s gesture to commemorate Sylvain with the naming of their new K9 member, Routs. Improving the culture of mental health in policing is a priority for the OPP and we will continue to engage in these vital conversations with our policing partners, while ensuring our members and their families get the support they need.”

Routs is an 18-month-old Belgian Malinois dog, who has recently completed his training with K9 Unit Officer Cst. Paul Chubb. BPS thanks the Ontario Provincial Police (OPP) for inviting Cst. Chubb and K9 Routs to join their training program, and after 18 weeks of training in total, Routs is now ready to join the BPS.

Cst. Paul Chubb is in his 17th year of policing. He joined the Barrie Police Service Tactical Support Unit (TSU) in 2010 and met Sylvain in 2015 on a Tactical Rope Access course. Cst. Chubb had always been interested in the challenging but rewarding work of the K9 Unit and through his time with TSU was able to work closely with the K9 Officers. When the opportunity to join the team arose in 2021, he jumped at the chance.

Routs and Cst. Chubb will join Serge and Cst. Abofs, and Thunder and Cst. Lamont in responding to a variety of calls, including warrants, robberies, stolen vehicles, weapons and missing persons.

For those who are struggling with mental health, there are a variety of resources available on the Sylvain Routhier Foundation website: https://sylvainrouthierfoundation.com/resources/

Click on the images below to view larger size 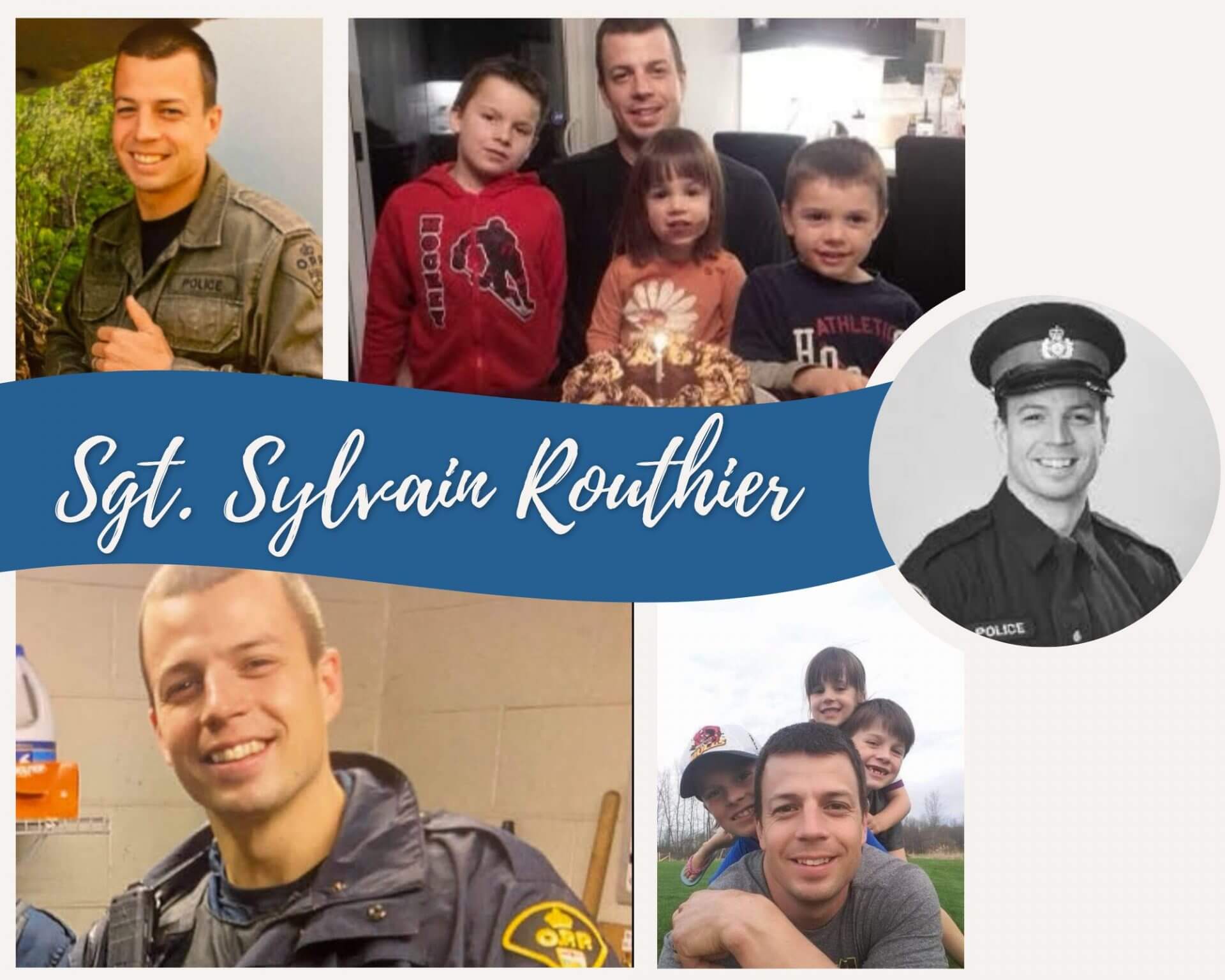 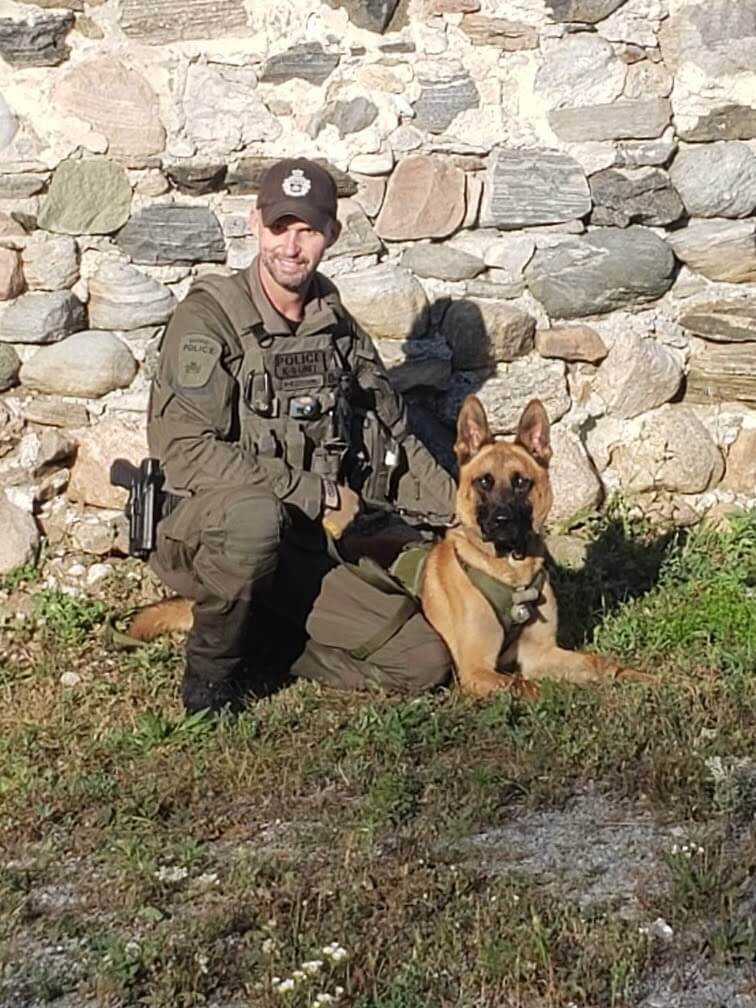