On Saturday July 31, 2021, at 8:22 a.m., Barrie Police responded to a residence located on Melrose Avenue for a report of a break and enter in progress. Upon arrival at the home, police located an open rear screen door and entered the home. Five suspects immediately fled from the house into surrounding backyards, but after a number of foot pursuits and a successful canine track, all five males were taken into custody and transported to Barrie Police Headquarters for further investigation.

From the investigation that followed, it was determined that one of the suspects was in possession of a firearm that was discarded when the suspects fled the residence. An appeal to the public was made and police also participated in a search of the firearm through the morning and into the afternoon. At approximately 3:00 p.m., a homeowner who lives on Steel Street located the outstanding firearm and contacted Barrie Police who immediately responded and seized the weapon.

From the outset, this incident was isolated in nature. Four adult males and one young person, all from Toronto, now face several drug and property related charges and one male also is facing a number of firearms related charges. All five arrested males remained in custody for a bail hearing on Sunday which resulted three of the males (two adults and one young person) being remanded in custody and two being released to a later court date.

Due to the fact that one of the accused is a young person who cannot be identified under the provisions of the Youth Criminal Justice Act (YCJA), none of the names of the other accused adult males will be released by police. 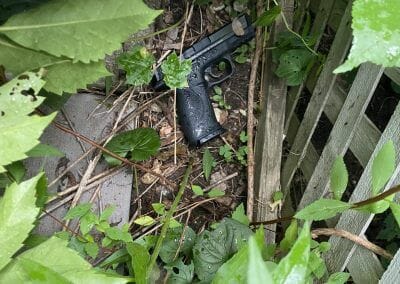