A combined collaborative and cooperative effort that was undertaken initially by the Barrie Police Service and expanded into an area policed by the Ontario Provincial Police recently concluded with the execution of search warrants, the seizure of illicit drugs that were destined for our streets and the arrest of dozens of suspects.

What began as a mid-summer investigation in the City of Barrie by members of the Barrie Police Service Street Crime Unit and in particular the Drug Enforcement Unit, very quickly grew, after it was determined that a group that had connections to the Greater Toronto Area (GTA) had chosen Barrie and Angus as distribution locations for the street level distribution of cocaine, fentanyl and methamphetamine that would be trafficked and otherwise sold throughout other areas of Simcoe County and the District of Muskoka.

The initial search warrant that was executed on a storage locker located in the Town of Innisfil in early September by the Barrie Police, who were assisted by the OPP, yielded a number of firearms and drugs. Later that week, four additional search warrants were executed and also seized was a quantity of cocaine, cannabis, crystal methamphetamine and heroin that contained fentanyl. Police also seized six high end motor vehicles which included three Mercedes Benz’s, an Audi, a BMW, a 2019 Toyota Tundra pickup truck and approximately $20,000 in stolen property from a recent break and enter (still in boxes).

As the investigation expanded north from the County of Simcoe and into the District of Muskoka, the effective engagement and subsequent deployment of the OPP Central Region Community Street Crime Units and the Organized Crime Enforcement Bureau provided the investigative impetus to bring this investigation to a successful conclusion. The timely execution of additional search warrants again yielded positive results and seizures of both opioids and methamphetamine, in addition to other controlled substances and firearms.

Project Shoreham, as this investigation was called, resulted in the combined arrest of 29 persons (7 by Barrie Police Service and 22 by the OPP) and saw a total of 279 Criminal Code and Controlled Drugs and Substances Act (CDSA) charges (100 by the Barrie Police Service and 179 by the OPP). All the arrested persons are now properly before the court and have either been remanded in custody or have future court dates. In total, 28 Criminal Code and CDSA Search Warrants were executed during this Project.

“Project Shoreham stands as an example of law enforcement agencies working together for one common goal: to hold people responsible for distributing these drugs, and to relentlessly endeavor to protect our citizens”.

“To those wishing to establish what you may believe to be complex drug distribution networks, our communities are not open for this type of business; through our ongoing commitment to our communities, the police will collectively use all the available resources, tools and investigative techniques that may be necessary to effectively eliminate your activity and rid our streets of criminal activity.” 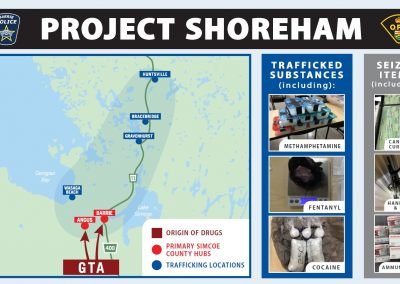