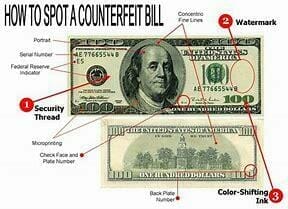 As a result of these incidents, business owners are being reminded to watch for $50 and $100 bills that may be used for purchases. American currency is very different than Canadian currency, but there are a number of ways to determine if the bill is real or fake and the first is by touching the bill as you receive it.

Authentic American currency is and feels thinner and is crisper because of the paper used when it is made; it also has blue and red fibres that appear to be printed onto the paper instead of being part of the paper. By examining the serial numbers located on the face of the bill, they should match. If you receive more than one bill, check to see that each bill is defined by its own unique serial number. Counterfeiters do not normally change serial numbers on fake bills, so if they are the same, then you will know they are counterfeit. Newer US currency uses raised ink and ridges can be felt in the Federal Reserve Crest located on the left side of the bill that has a face. The ink on real money when rubbed on paper will not rub off and the face will appear to be crisp and vibrant and will not blend in with the colouring on the bill.

The bills in question have all been forwarded to the Royal Canadian Mounted Police (RCMP) Anti-Counterfeiting Bureau for examination and authenticity. If they are deemed to be counterfeit, they are promptly returned to the United States Secret Service and  the victim will be out the denomination represented by the bill.

Anyone with information with regards to these incidents is asked to contact the Barrie Police at 705-725-7025, by contacting Crime Stoppers at 1-800-222-TIPS (8477), or leave an anonymous tip online at www.p3tips.com.