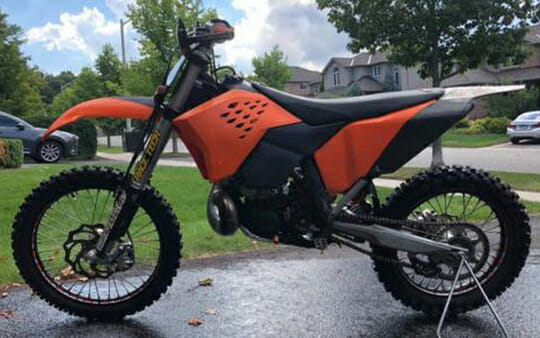 The Barrie Police Service is appealing to the public for assistance after a theft was reported from a residence located in the City of Barrie.

On Friday, June 21, 2019, at 3:24 p.m. a homeowner who resides on Kozlov Street returned home to find that his dirt bike, which was parked in his garage, had been stolen. Through the use of a home security system, it has been determined that the suspect believed to be responsible for this theft approached the home and walked into the open garage at 2:23 p.m. The unplated dirt bike is described as an orange and black. 2006 KTM 250cc, with a white sticker on the rear fender, a Race Tech sticker on the front forks, Stealth FMF pipe, a speedometer on the handle bar and vehicle identification number of: VBKMXM2349M249031.