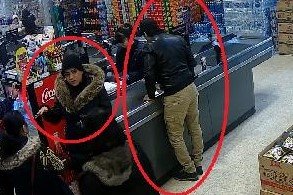 The Barrie Police Service is appealing to the public for assistance after a distraction theft was reported at a business located in the City of Barrie.

On Saturday, November 16, 2019, police attended the Centra Food Market located at 320 Bayfield Street after two suspects purchased two drinks. The male suspect then asked to exchange $20 bills after telling the cashier that he collects Canadian currency and in particular was interested in the serial numbers. The cashier accepted the rather unique explanation and willingly handed over a quantity of bills. The suspects were then able to distract the cashier and the other customers in line and this allowed the male suspect to leave the store with nineteen $20 bills.

The actions and distraction technique was captured on video surveillance and as a result, the follow descriptions have been obtained: