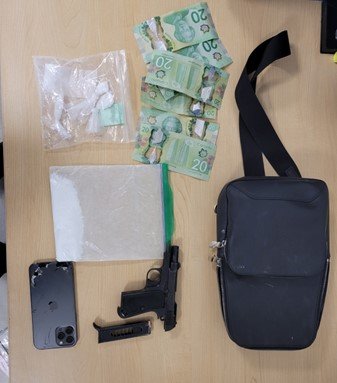 Last night, shortly after 6:00 p.m., Barrie Police received reports of a suspected impaired driver who was last seen in the area of Anne Street South and Tiffin Street. The motor vehicle, a white pickup truck, had initially been observed travelling southbound on Highway 400 and was reportedly swerving from lane to lane as it left the highway and began travelling on City of Barrie streets.

At 6:17 pm., police located the pickup and safely stopped it on Bayfield and Collier Streets. The driver, a 41-year-old male from Gravenhurst exhibited obvious signs of impairment and was subsequently arrested for impaired driving. A short time later, police located a quantity of suspected cocaine, Canadian currency and a loaded firearm in the pickup truck.

The accused was transported to Barrie Police Headquarters where the investigation continued, and a qualified Drug Evaluation Evaluator determined that he was impaired by drug. He was also charged with a number of firearms and drug related offences and was held in custody for a bail hearing which is scheduled to take place today.