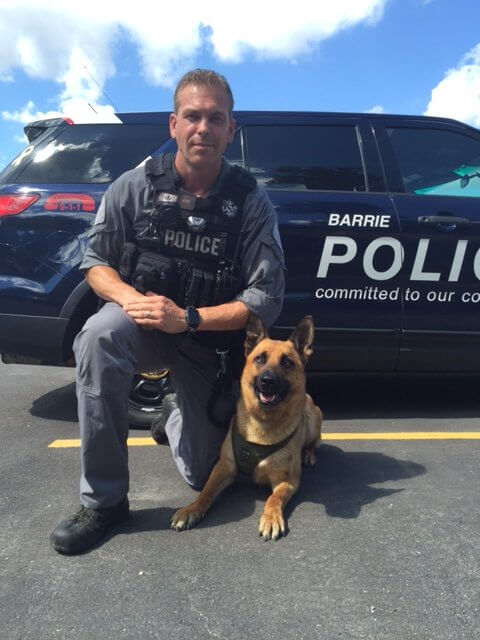 On Wednesday, June 15, 2022, at 8:26 a.m., Barrie Police was notified by a number of concerned citizens about a suspected impaired driver operating a blue dump truck, while travelling eastbound on Dunlop St. as it entered the City of Barrie from Springwater Township.

The dump truck was located and as an officer was speaking to the driver, he sped off driving in a dangerous manner. Police located the truck abandoned on Archer Street and immediately set up a perimeter and awaited the arrival of the Canine Unit. A short time later, in a greenspace between Elizabeth Street and Patterson Road, the driver was located by Barrie Police Service dog Serge, his handler and members of the Tactical Support Unit who had assisted with the track.

A 41-year-old male from Brampton, Ontario was taken into custody and transported to Barrie Police Headquarters where the investigation continued with the assistance of Investigative Services. As a result, the driver is now facing the following Criminal Code charges:

The accused was released from custody and is scheduled to appear in the Ontario Court of Justice located in Barrie on June 29, 2022.

Barrie Police wish to acknowledge that the public played a significant role in removing an impaired and dangerous driver from our streets as the initial calls received provided police with information that readily identified the dump truck and subsequently, the impaired driver.