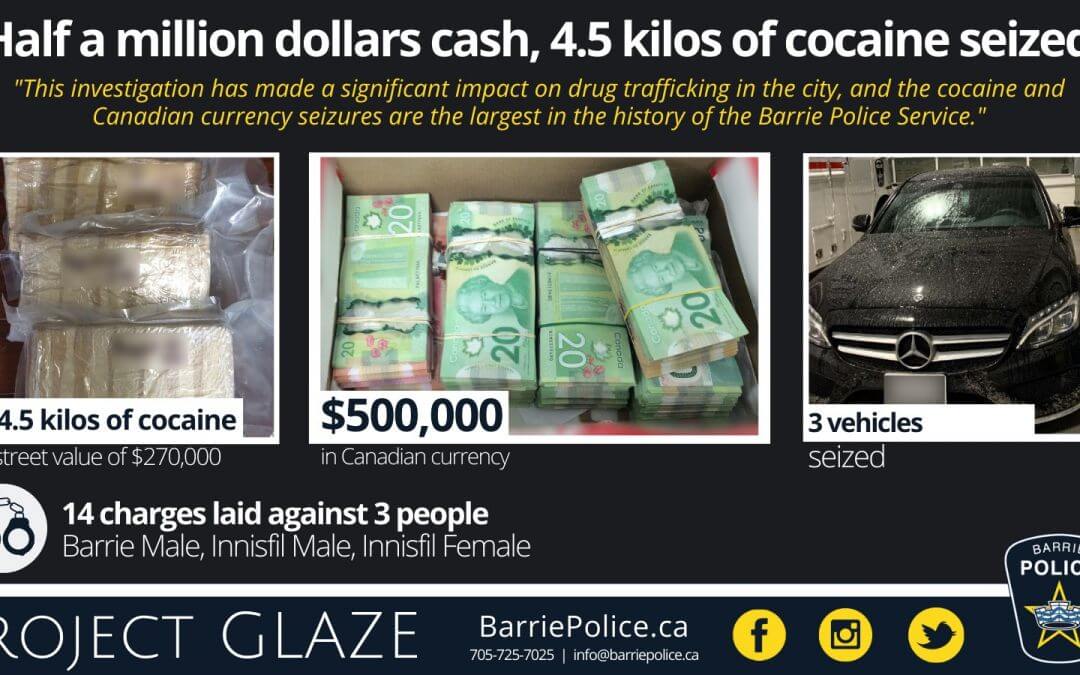 A four and a half month long investigation that was conducted by the Barrie Police Drug Enforcement Unit concluded with the execution of Controlled Drug and Substance Act (CDSA) search warrants at four residences in Barrie and a home and storage locker in Innisfil on Monday, November 23, 2020. In addition, search warrants were also executed on four motor vehicles that were known to be associated to this investigation.

Project Glaze focused on the illegal sale and distribution of narcotics and concluded with the successful dismantling of a complex network that was responsible from drug related trafficking in the Barrie and Greater Toronto Area (GTA). The search warrants that were executed resulted in the seizure of drugs, property, Canadian currency, and the arrest of seven adult persons. At the conclusion of the investigation, a 35-year old male and 33-year old female from Innisfil along with a 32-year old male from Barrie collectively face 14 drug and criminal related charges that include possession of proceeds obtained by crime with a value in excess of $5000. Due to the serious nature of the charges, all three were held in custody for a bail hearing while the four other adults initially arrested were released unconditionally and do not face any criminal charges.

The investigation yielded the following seizures:

Inspector Johnston of the Barrie Police Investigative Services states, “this investigation has made a significant impact on drug trafficking in the City and the cocaine and Canadian currency seizures are the largest in the history of the Barrie Police Service. Project Glaze clearly serves a message that criminal activity of this type has no place in our community.”

Additional photographs are available to accredited members of the media only.