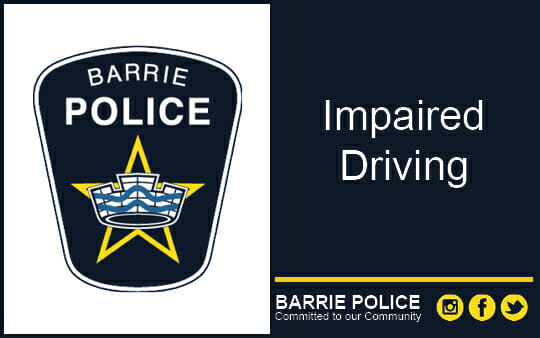 On Thursday January 12, 2023, just after midnight, Barrie Police responded to a report of a single motor vehicle collision at the intersection of Lakeshore Drive and Victoria Street. Upon arrival at the scene, it was apparent that the operator of a passenger van struck a light post at the intersection as they were travelling northbound on Lakeshore Drive. The van came to rest on top of a concrete median, approximately 50 metres north of the light post that had been struck.

Police located the uninjured driver and arrested a 36-year-old female from Barrie for Impaired Driving. She was transported to Barrie Police Headquarters where the investigation continued and later concluded with her being formally charged with Impaired Operation of a Conveyance and Drive over .08mgs.

The driver was released from custody and is scheduled to appear at the Ontario Court of Justice located in Barrie on January 25, 2023. Temporary repairs were made to the downed traffic light pole by staff from the City of Barrie once police completed the on-scene collision investigation.