On Saturday July 16, 2022, shortly after 6:30 p.m., Barrie Police responded to the area of Mapleview Drive East between the Highway 400 exit and Park Place Boulevard for a disturbance.

Upon arrival of the police, it was determined that there had been a minor motor vehicle collision and as the two drivers were attempting to exchange information, an unknown male approached one of the involved drivers and offered to buy his car. The bizarre behaviour of this individual continued as he jumped into the driver’s seat of the vehicle owner he approached. The owner was able to physically remove the male and the ensuing altercation resulted in one car being damaged and two additional attempts made by the male to steal other occupied cars located in nearby parking lots.

A Barrie Police officer located the suspect as he attempted to run away and during the arrest, the officer was assaulted. Although treated for minor injuries at a local hospital, the officer was released and continued to assist with this ongoing investigation.

The accused, a 36-year-old male from Barrie has been charged with Robbery (3 counts), Mischief, Assault Police and Breach of Probation and was remanded into custody. He is scheduled to appear today, by video, for a bail hearing. 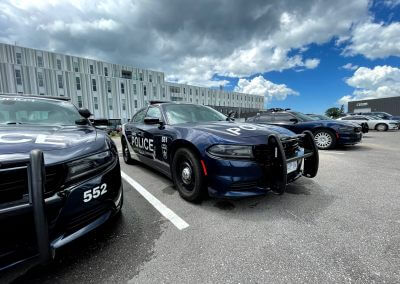