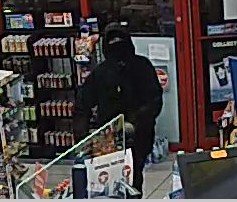 The Barrie Police Service is asking for the public’s assistance in identifying a suspect in an armed robbery that occurred early this morning.

At approximately 4:30 a.m., the suspect entered the Circle K store located at 149 Dunlop Street East in Barrie. After approaching the lone employee working, he displayed a weapon and demanded cash. He then left the store on foot as was last seen heading east on Dunlop Street.

The employee was not physically injured during the robbery.

Uniformed officers, along with the Barrie Police K9 Unit responded and the investigation is ongoing.

Investigating officers are asking anyone who may have information to please contact the Barrie Police Service at 705-725-7025 ext. 2129. Any information can be provided anonymously to Crime Stoppers at 1-800-222-TIPS or leave an anonymous tip online at www.p3tips.com.