The Barrie Police Service is asking for the public’s assistance in identifying a suspect who is wanted for the theft of a van.

On March 26, 2020, police attended to a business located on Ferndale Drive North after the owner discovered that one of company vans had been stolen from the Rona parking lot located at 61 Mapleview Drive West. The van, which is described as a 2000 Ford Econoline, black in colour was fully decaled with the company’s Plumbtec logo on it and had been parked in the northwest portion of the parking lot for advertising purposes on March 23, 2020. The following day at 9:38 p.m., the van was used in a theft of gas from a service station located on Commerce Park in Innisfil. On April 2, 2020, Barrie Police located the van parked in the rear lot of the Kozlov Mall located at 400 Bayfield Street. The van did not appear to have been damaged other than the driver’s side door lock being removed; none of the van’s contents was missing.

As a result of the ongoing investigation, police have obtained video surveillance from the initial theft located on Mapleview Drive West, the theft of gas location abandoned and on Commerce Park in Innisfil and from the Kozlov Mall where the van had been parked.

A suspect image has been located from video obtained from the Kozlov Mall and police are attempting to identify this person who is described as:

Anyone who may have information to please contact the Barrie Police Service at 705-725-7025 ext. 2634 or email the investigating officer at [email protected] Information can also be provided anonymously to Crime Stoppers at 1-800-222-TIPS or you can leave an anonymous tip online at www.p3tips.com. 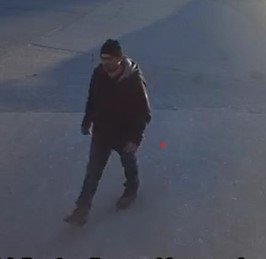