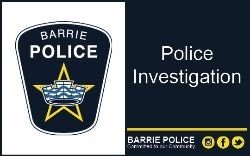 On Tuesday, February 23, 2021, shortly after 9:00 a.m., the Barrie Police Service was made aware of incident that had earlier taken place at the Royal Victoria Regional Health Centre after a 25-year old male was transported to the hospital with vital signs absent.

From the investigation that followed by detectives from the Barrie Police Investigative Services, who were assisted by uniform officers from Operational Services and the Forensic Identification Unit, police learned that a group of people had gathered at a residence located in the Town of Innisfil where they socialized during the early morning hours. During this time, alcohol and illegal drugs were consumed and a male who was in attendance went into medical distress. It was later determined that Fentanyl, which had been supplied by an individual who was present, had been used and that the male was likely suffering from a drug overdose. At no time were emergency services contacted and his health continued to deteriorate. He was later taken to hospital by a couple of the people with whom he had gathered, but by then, attempts to revive him failed and he was pronounced deceased by hospital staff.

On Thursday, February 25, 2021, just before 3:30 p.m., a 36-year-old male from Innisfil, Ontario attended Barrie Police Headquarters where he was arrested and charged with:

After appearing for a Bail Hearing on Friday, the accused was remanded into custody and is next scheduled to appear next at the Ontario Court of Justice located in Barrie on Friday, March 26, 2021.