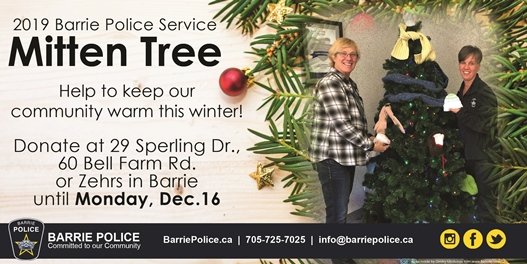 With the early start to the snow, the Barrie Police Service has already started collecting donations for the annual Mitten Tree campaign.

In 2019, Officer Janet retired after a policing career that spanned more than 30 years and touched thousands of lives of all ages. Janet will be returning to help organize the 2019 Mitten Tree, and share her passion with another BPS Member, who will become the new Champion for the annual campaign.

Many families, including seniors, are faced with low income, high rent, and everyday living expenses, and it can be a struggle to make ends meet. The need to help individuals stay warm within the community has continued to grow throughout the years.

The Mitten Tree is one of many holiday initiatives that allow members of the Barrie Police Service and the community to give back. Tens of thousands of hats, mittens, gloves, and scarves have been distributed to individuals of all ages, throughout the City of Barrie and surrounding area.

The success of the Mitten Tree can be attributed to the generosity of the community, local elementary schools and members of the Barrie Police Service. Donations have been sent in from Toronto and as far away as Nanaimo, British Columbia from avid knitters who contribute to the campaign every year.

The Mitten Trees continue to become more vibrant and erupt with vast donations of hats, mittens, gloves, and scarves which have been donated to:

If you would like to donate to the Mitten Tree campaign, please visit the Barrie Police Service, at one of two locations, 29 Sperling Drive or 60 Bell Farm Road, Unit # 1, in the City of Barrie. Trees will also be available at the three Zehrs locations in the City of Barrie for donations as well.